After all, what is “being a museum” in ICOM’s definition? 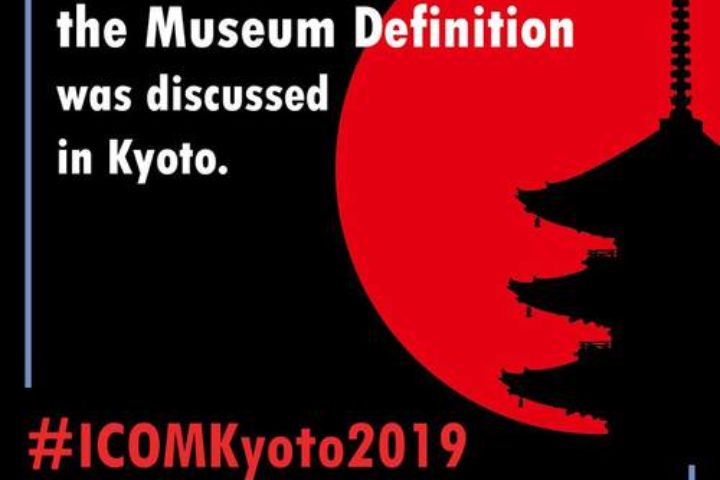 The slogan “I was there when the definition of museum was discussed in Kyoto” runs these days in social media. And newspapers around the world take up the topic, saying that this “there”, the ICOM general assembly, was an intense, “deep and healthy” debate – or “a strange and untransparent descent into chaos,” according to the president of the working group that originated the proposal for a new definition of museum. However, apart from adjectives, what was left was the postponement of any decision, taken by about 70% of the voters, and if this new proposal were really to vote, it would certainly reach 80% against, because several committees were against the postponement, yes, but because they wanted to reject it, right there.

What was in question in Kyoto, and what made museums around the world vibrate so much? Well, in essence, an opposition, which I am sure will be accentuated in the future, between a purely instrumental and aspirational vision of museums, which at the very least diminishes them by their assimilation to any other cultural institution or project animated by motivations and principles of social democracy, and another that, without rejecting such principles, seeks to fixate on what distinguishes museums, makes them unique and therefore magnifies them in their irreducible originality. The first perspective is best suited to “activists of all just causes”; the second is for museum professionals, ICOM being precisely their most worldwide representative NGO (over 44,000 worldwide), designed in a bottom-up sociological and juridical conception.

The proposal for consideration by the ICOM General Assembly resulted from the action taken in the last three years by a working group set up and made up at its discretion by the president of ICOM and subsequently validated by the Executive Board. During this period, this group promoted dozens, maybe more, of debates around the world, with very variable participation, both in quantitative terms (tens or hundreds of participants), as well as in qualitative terms (amalgam between mere “museums’ lovers” and scholars or professionals, with limited and unregistered participation of ICOM members). I have personally been able to participate in several, both in Latin America and Europe, and I know what they were: nice and vivid assemblies, at best, but without any conditions to seriously think about what museums are or should be, in professional terms.

The group also collected 269 proposals for a new definition of museum (a number that may appear impressive, but it turns out to be modest, considering that the surveyed universe was potentially made up of all the inhabitants of the planet). Aligned anonymously (with indication only of the proponent’s country of origin, which curiously shows that most of them were European or North American), it is worth noting that the largest of these definition proposals were “poetic hymns” (one of them, Italian, it simply proposed that museums be described as “places for distilling visions”, period), in some cases reaching the level of manifestos. But it turns out that not even this bizarre collection was retained in the proposed definition. ICOM France has clearly demonstrated this: the proposed definition is anchored in terms that are not even mentioned by 1% of respondents (“polyphonic”, “conflict”, “social dignity” or “planetary welfare”) and others by less than 5% (“challenges”, “equal rights”, “human dignity” or “global equity”). That is, a set of statements that wander between meritorious (who can oppose the defense of “social dignity”?) and the undecipherable (is not “global equity” a pleonasm in itself?), almost in the manner of “miss universe statement”, but without really fulfilling what is required of an operational definition of a museum.

And is such a definition so important? Yes and no at the same time. Of course, as with whatever it is, the underlying content (real, desirable or even simply imagined) is much more important than the terms that, by trying to fix it, always reduce that essence. But definitions are still necessary, either in pure or applied science, as for the most in organizations that are guided by the empirical principle of effective intervention in life, aiming to establish boundaries allowing to define social and professional fields – and to defend them upon all possible interlocutors. Now, as ICOM Canada, for example, has shown, ICOM’s definition of museum is now used in the national laws of many dozen countries and serves to preserve museums as “permanent institutions” (designation irresponsibly abandoned in the proposal), meaning, entities with some organizational autonomy vis-à-vis the political powers of the shift; and the emphasis putted on the technical specificities of the so-called “museums’ functions” is also a recognized guarantee of the careers and independence of their professionals. Given these implications, it becomes easily understandable why so many extra-European committees, even more than European ones, had vehemently complained about the regression that the proposed new definition could constitute in their countries, where democratic practice is less rooted and the so-called “civil society” proves to be weaker.

In other words, perhaps inebriated by their inflamed discourses, closed-loop built, it happened to the most activist advocates of the new definition proposal, rudely rejected, which often happens to those who let themselves be detached from reality: they bumped into it, simply. The US example was in this particular paradigmatic: while the chair of his respective national committee of ICOM, known for its recognized debility, comparing to what ICOM national committees are in almost all developed countries, was resolutely advocating in favor of the new proposed definition, the president of the American Alliance of Museums, the true leader of museums in that country, recommended postponing the decision – which seems to have been shared by representatives of the rest of the world who decided as such, massively.

What will it happen from now on? Well, it is to expect that the discussion will be launched again in a future new extraordinary general assembly, maybe next year, in June, during the annual meetings of ICOM in Paris. But no one knows exactly which process will be followed in order to satisfy the criticisms raised by the vast majority of national and international committees who have defend postponement as a way to enlarge the discussion within ICOM and to finally get maybe several alternative proposals, aiming to be more consensual. The only guideline is what substantively was approved when postponing was voted: the EGA “takes note of all the contributions that have been made during the EGA for future debates on the Museum Definition.”

The president of ICOM emitted, nevertheless, a note immediately after the postponing decision saying that: “The discussion continues, and MDPP will continue its work by interacting with all the National and International Committees, to talk about the implementation and assimilation of these new ideas as they will probably appear in the new definition that will be and amendment of the proposed one. This is not the end, this is just another beginning in this process of redefinition. I invite all members to participate in the discussions as they advance.” And this note has comprehensibly generated great discomfort among the subscribers of the postponing proposal, ICOM Europe included. Firstly, to keep the MDPP is in itself doubtful: maybe it would be time now to clearly distinguish between “museum definition” and “prospects and potential”. The last are surely important to consider, but could maybe advantageously be transferred to a sort of “mission statement” or “strategic goals” level, not integrating the definition itself, which has to be short, straight worded and centered in what really distinguish museums. Secondly, if really to keep the MDPP, then its composition has necessarily to be profoundly reviewed and strong, clear, links are to established with national and international committees, maybe throughout the Advisory Board or, as it seems more natural and wised, by attributing the centrality of the process to ICOFOM, which has not only the capacities but the organizational legitimacy to act as such.

Let’s so hope that the process will not, from now on, repeat neither the methodology, nor the conceptual frame of these last three years. Doing the same thing over and over again and expecting different results is the Einstein’s definition (here we are: definition…) for insanity – and we have necessarily to be concerned on what can it happen to ICOM if the next EGA is to be faced with basically the same conceptual proposal. Being optimistic, and most of all, having full confidence in ICOM capacity to regenerate, as it was eloquently proven in Kyoto, I dare to anticipate that the future museum definition, departing maybe from the current one as it has been done in the past, will reach wide consensus and will continuing to serve as powerful tool in order to defend and promote museums and museums professionals world around.

Obs.  Any language, English included, has subtleties and different semantic understandings of the same words, which may vary from country to country, and in many cases are not perceptible by not native speakers. This may be the case with two qualifications I use above, referring to museum organizations in the USA. Therefore, I would like to clarify that the reference to “debil” for ICOM USA means that its representation and recognition among museums and museums professionals of that country is relatively weak, much weaker than that of most ICOM national committees in so-called developed countries. As for AAM’s the qualification as the “true leader” of US museums and museum professionals, means that its representativeness and social influence are widely recognized, and there is no other organization in that country that achieves such levels of notoriety. These are factual findings, exempt from any moral appraisal of both organizations and, less so, of their leaders.